Last night was the final community meeting of this stage of the study commissioned by the Plainfield City Council on possible future uses of the Muhlenberg campus. I remain committed to restoring more medical services and opposed to the JFK scheme to place 660 apartment units there.

Now, you must pardon my cynicism regarding the commentary by Assemblyman Jerry Green, who spoke toward the end of the meeting about his "commitment" to Plainfield. We all know that Jerry Green has maintained a conspicuous silence for the past few years on Muhlenberg, and we also know that Green received $50,000 a year as a "VP" for the Alman Group, a lobbying firm for JFK. It was not a good look for someone supposedly "committed" to restoring the hospital. When he was called out publicly on it, he resigned under pressure and bad public relations.

In his comments last night, Green mentioned that he has served on the legislature's Health Committee for ten (10) years--what did he DO in all that time to save Muhlenberg? He is suggesting that he will do something now?? Pardon my cynicism!

Green also stated last night that he wanted "to sit with people" to talk about the uses of the campus. The hospital CLOSED in 2008--now, in 2014, he wants to SIT DOWN to talk about it--after the third community meeting?? Pardon my cynicism!

Jerry Green's "epiphany" regarding the 660 units is laughable. 35 days before a critical election, he all of a sudden wants to try to convince voters in this city that he is against the JFK proposal. I guarantee that on Wednesday, June 4 (the day after the primary election), Green will have another epiphany and reverse himself once again. The people cannot be fooled.

Jerry Green came up to me after his embarrassing Liberty Village debacle to yell at me because I supported the right of one of my constituents to speak during the council's public comment. I guess that, as someone who has sworn to uphold the constitution, he forgot about the part called...um...the First Amendment. The women I was speaking with were shocked at his nasty demeanor, and one said, "...he's nothing but a street thug, talking that way to us."

Back in 2008, Jerry Green cursed me in front of a crowd of people after a candidate forum for Annie McWilliams, who was running for city council at the time. The 20 or so people were shocked by his behavior as a sitting legislator--I had done nothing, had said nothing--I was simply working on Annie's campaign. Many people got to know the "real Jerry Green" last week when he was caught on camera being extremely nasty to city staff and constituents.

They had earlier seen the "real Jerry Green" when he allowed himself to get foolishly baited into yelling and cursing in the street on the last election day: "I own this motherf_cker!" he said, referring to our city of Plainfield. Well, the truth of the matter is that he doesn't "own" Plainfield, but you see that he thinks he can continue to manipulate voters. Don't be fooled.

Posted by Rebecca Williams at 10:13 AM 3 comments:

FINAL COMMUNITY MEETING ON THE FATE OF MUHLENBERG TONIGHT!

I want to remind everyone that the final community meeting to discuss the future of the Muhlenberg Campus is scheduled for tonight, Tuesday, April 29, at 7:00 PM at Emerson Elementary School, located in the First Ward at 305 Emerson Avenue.

Please see my previous blog post on this issue by clicking here. It is imperative that residents from ALL OVER our city come out to provide input to the consultant hired by the City Council on what you want for that campus.

Rebecca
Posted by Rebecca Williams at 9:02 AM No comments:


I want to remind everyone that the next community meeting to discuss the future of the Muhlenberg Campus is scheduled for Thursday, April 24, at 7:00 PM at Clinton Community School, located in the Fourth Ward, 1302 West Fourth Street, at Clinton Avenue.

The hope is that having the meeting in the local neighborhoods near the schools will make it easier for parents, residents, and other stakeholders to make it to the meetings. When I was out in the Fourth Ward canvassing, Muhlenberg was one of the top issues that our citizens were concerned about (the other issues were public safety, jobs, quality of life issues, and PMUA rates--especially for the senior citizen homeowners on fixed incomes).

So, the fact that this meeting is in the heart of the Fourth Ward should encourage everyone there who is concerned about keeping medical services in our city to come out. I would add, though, that it is imperative that residents from ALL OVER our city come out to provide input to the consultant hired by the City Council on what you want for that campus.

You know that there are forces at work which are determined to force their agenda (and make megabucks off so-called "luxury" apartments) onto the people of Plainfield. JFK proposes to provide an upgraded emergency room here--and maybe put in an X-Ray machine or something, and at the same time add 660 luxury residential units on the campus. How does it make any sense to take away hospital services and add upward of 1200-1500 new residents? Imagine the additional burden that would be placed on our already-strained resources!

Interestingly, when we (the City Council) were looking at the proposed budget deliberation schedule the other day, I saw that a budget discussion was scheduled for the same night as the community meeting. I suggested to my colleagues that we not have our budget talk on the same night as this very important community meeting, as it was not in the interest of our residents to be forced to choose between these two meetings, which focus on the future of Plainfield.

Councilman Reid then stated that he didn't see why the council should have to change the schedule because one councilperson (me) wanted to go to the community meeting on Muhlenberg--he ignored the fact that Councilman Cory Storch was at the first meeting at Plainfield High School.

What was interesting was that Reid seemed to be implying that no one else from the governing body would be attending these very important community meetings--which had been scheduled prior to any budget scheduling. I made a comment as to why he presumed to know what the other councilors would want to do. Ignoring me, as usual, Reid made it pretty clear that these community hearings are not important to him--I find that highly problematic.

We, as councilors, hired the consultant, and we are YOUR representatives. I think it's important to hear from my constituents--I consider it my obligation as the person YOU PAY to represent your interests to hear what you have to say regarding this and other issues important to our city. That said, the council will not be having a budget deliberation on that day, and I will be at the Thursday, April 24th Community Meeting to hear from those of you who perhaps could not make it to the first one.

Please let your neighbors know to come to the Thursday, April 24 meeting. We will be spreading the word in other municipalities as well--remember, Muhlenberg was a regional medical center, used by the people of North Plainfield, South Plainfield, Edison, Fanwood, and Scotch Plains, as well as Plainfield. The Plainfield City Council wants to hear from you. I would also urge those of you who cannot make it to the meetings to write or email us to let us know your thoughts. 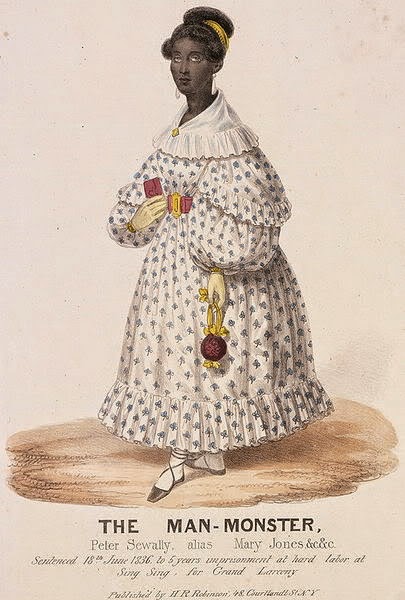 On Friday, April 4, I went down to the 2014 Northeast Modern Language Association (NeMLA) Conference in Pennsylvania to preside over a panel I developed titled “Race, Sex, Class, and Bawdy-House Life in 19th Century America.” The panel examined American life during the 19th century, focusing on increased anxieties about race, sex, class, immigration, expansion, urbanization, and industrialization as reflected in novels, short stories, newspapers, and illustrated magazines.

In the 19th century, population growth led by immigration and westward expansion created rapid development of cities in the East and in the West. With this influx came a surge in building construction as well as rooming-house living. Further, additional inducements for the new city dwellers included easier access to drugs, prostitution, gambling, and other temptations. The panel explored 19th century print culture to show how it reflected, as well as responded to, the era’s anxieties about race, sexuality, and class.

The purpose of my paper, “Illustrating Prostitution in Antebellum New York: ‘Loathsome Spectacles,’” was to frame the ongoing critical conversation about urban anxieties and ambivalence regarding the foregoing. This idea of the “loathsome spectacle” was utilized to describe all those who transgressed the paradigms of virtue and respectability promoted by conduct manuals and religious tracts of the time. Drunkards were viewed with contempt, and prostitutes, whose trade was certainly plied amidst the respectable middle class, including, of course, newspapermen, were similarly and hypocritically scorned.

I spoke about three cases that came to public attention in 1836. The Awful Disclosures of Maria Monk or, The Hidden Secrets of a Nun’s Life in a Convent Exposed, published in January of that year, was a sensational story—a lurid exposé of nuns forced into sex with priests, pregnant nuns whose babies were birthed, baptized, and then strangled and buried in a lime pit in the basement of the convent hospital. This notorious text fueled already strong anti-Catholic sentiment, even when Monk’s “disclosures” were proven to be untrue. I also touched on the case of Helen Jewett, a sex worker who was murdered in April of 1836 by a client/paramour named Richard Robinson (later acquitted), in one of the most sensational and, of course, widely illustrated stories of the time.
The other part of my presentation focused on the story of Peter Sewally, a black, transgender prostitute, whose case excited both the derision and the fascination of the public, and where race, sex, and class intersected in a spectacular way. In June of 1836, in Greenwich Village, Sewally, wearing women’s clothing and using one of his many aliases (Mary Jones), had stolen money from a client—a white laborer named Robert Haslem—after a sexual assignation.
Sewally is arrested for grand larceny, and during a body search, it is discovered that he is not biologically female. The ensuing trial provided even more sensational fodder for the newspapers. It turns out that Sewally had created a makeshift vagina from two pieces of meat, which she held between her thighs under her dress, and which fooled clients into thinking they were having sex with a woman. Her nickname during the trial was “Beefsteak Pete!”

In addition, Sewally defiantly and proudly attended his trial in women’s clothing, explaining that he was “induced” to dress in female attire by other prostitutes. After the trial, he was convicted and sentenced to five years at Sing Sing. In The Amalgamation Waltz: Race, Performance, and the Ruses of Memory, Tavia Nyong’o writes of the acceptance that this black, transgender prostitute found in his community—among other sex workers as well as his own black community.

Peter Sewally was called a “Man-Monster” in the famous lithograph that was sold during the trial, and which I have reproduced here. On the contrary, this is no monster—Peter Sewally looks quite fetching!

The other panelists, Theresa Vara Dannen (“Women as a Force for Social Change: Interracial Marriages in 19th Century Connecticut”), Hannah Ruehl (“The Industrial Age Amateur in Life in the Iron Mills: A Reprimand”) and William Mark Poteet (, “Huck Finn Returns: The Influence of Lighting Out for the Territory on Harold Frederic’s The Damnation of Theron Ware”) presented wonderful work as well—it was an exciting evening!